Review of The Bunny Trail
by ManyBooks
​ 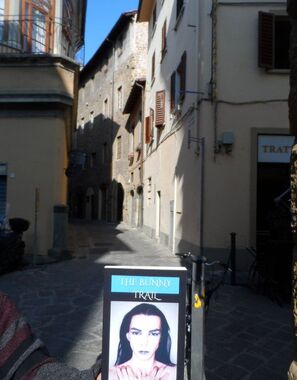 The Bunny Trail, by DJ Tombe, is a warm and surprising story of found family and personal discovery, with an unusual friendship between Michael and Bunny at the center.

As a child and teenager, Bastian is growing up almost in hiding in his family’s estate in Italy. A facial deformity leaves him almost unable to leave the house or socialize, since others are frightened and repulsed by his appearance. Naturally, this childhood affects him for his entire life, and much of the book explores this isolation.

When the little granddaughter of one of the family’s employees wanders downstairs to where Bastian hides out, Bastian expects her to cringe, too, but instead, he ends up making her pizza. The spirited little girl becomes Bastian’s first friend, although she decides right away that she doesn’t care for the name Bastian, and renames him Michael. Bastian/Michael has never had a friend or a nickname and uses this new name happily for the rest of the book.

Little Bunny starts to spend her summers with Michael and his family. She is almost the whole family’s pet, and the novel is full of touching moments when brash and chatty Bunny connects with Michael’s distant father or older brothers. The novel is a huge success in these scenes, revealing complicated characters and relationships. These moments of affection and quiet change are too gentle to be described as a page-turner, but readers will find themselves completely caught up in discovering Michael’s family and life. Characters here are fully developed, with reasonable, realistic flaws and believable relationships.

When Michael reaches his adult height, he’s able to have reconstruction surgery on his face. One might expect his troubles to be over, since so much of his struggle in life comes from his face, but he continues to discover new ideas about the way he wants to be seen by others. Again the book fully develops and explores this character, and of course Bunny is along beside him.

The second part, from Bunny’s perspective, is not nearly as strong as Michael’s story. After seeing the complexities of Michael’s life slowly develop, in the second part, we’re introduced to too many characters too quickly, and it’s too easy to get confused about Bunny’s new friends. There isn’t as much detail and complexity in some of the secondary characters in the New York part of the story.

Bunny herself is developed much further here, and it’s a fascinating look at a complicated person. In Bunny’s story, we see how the neglect in her young life continues to affect her. While Michael’s family had some idea of the neglect and abuse in Bunny’s home, they weren’t able to prevent it. Instead, they all work to make her trips to Italy better and better. Readers can see how an unstable home life, but with the affection from her Italian family, continues to shape Bunny as a young adult.

The two distinct voices really made me feel like two characters had each written their own half of the story, right down to the smallest details. Bunny, an American, describes height in feet and inches, while Italian Michael uses metric. Their memories and perspectives felt rich and realistic. Throughout the book, with both Michael and Bunny, readers can see how characters grow, but are also held back by their early experiences.

The end of the book makes it clear that Bunny and Michael’s story is far from over.

​I Go With Thee

The Bunny Trail is the first book in The Bunny Trail series.
The second book, Thou Wilt Go Now, Rabbit, coming out in the fall of 2021, continues The Bunny Trail story.
The third and final book in the series, I Go With Thee, will be released spring of 2022.
CONTACT DJ TOMBE